Creating a Legacy by giving to the Virginia Community Foundation ensures the growth of the unrestricted endowment. The following group has grown since 2013 when the first major “Named Gift” was made. Each “Named Gift” is accounted for and acknowledged after meeting the minimum amount of $10,000. If you are a regular giver, contact the office if you are interested in creating a “Named Legacy.”

Ralph Carlson (1928 – 2019) lived most of his life in Virginia, attending Virginia schools and graduating from Roosevelt High School. He received a degree from the University of Minnesota Duluth in Accounting.

Ralph served in the US Army in Korea earning the Bronze Star medal. He worked as an accountant for US Steel – Minntac until retirement in 1983.

Ralph always said the best thing he ever did was marry Julie Amys. 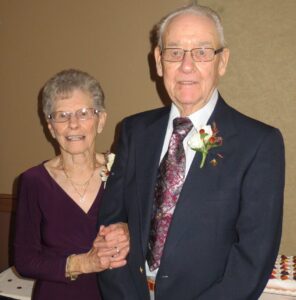 Together for 55 years, they enjoyed seasons tickets to the Virginia Blue Devils hockey games, spending time and fishing on Lake Vermilion, travel (especially to Hawaii and cruising), and spending time teaching grandkids to play Cribbage.

An ambitious man, Ralph was kind and caring. He took his responsibilities seriously. He updated his parents’ house to make sure his mom could live in the house after his dad passed away.  After working hard for 35 years, Ralph had saved enough money to enjoy his 36 years in retirement.

Ralph was a regular contributor to the Virginia Community Foundation because he enjoyed the renovation projects and appreciated support for schools and students.

Kurt and Carol Sundquist, created in 2012